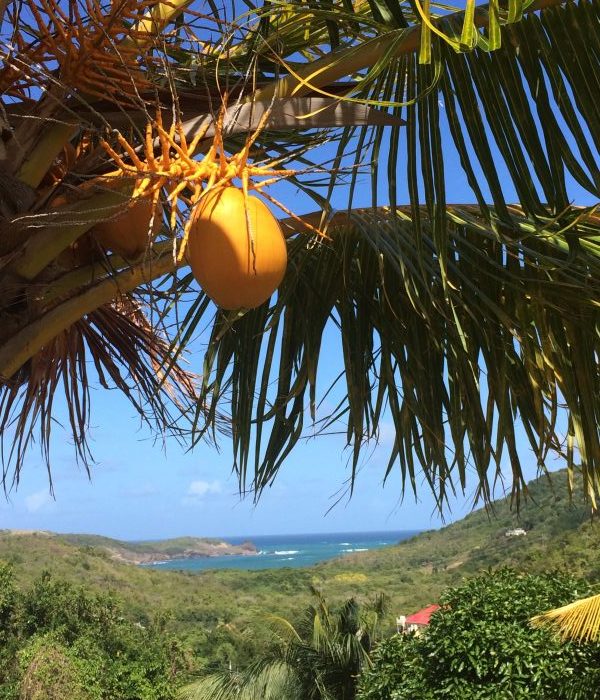 My first impressions of St Lucia when I moved here was that it is just so green and lush with magnificent hills everywhere.  After the flat arid landscape of Aruba, I felt that I was back in the tropics, despite both islands being in the Caribbean.

Still in what I call “Stage 1” of an expat life where everything is enjoyable I started to find my bearings and become a bit familiar with the island.   Exploring a new country is one of my favourite first stages of being an expat.  Where you don’t quite have your bearings and are noting every landmark as a point of reference for when you venture out in the car by yourself.   As the husband drove me around St Lucia, showing me a few beaches and bars that he had found he had the confidence of someone who had been there a while.   I was still the tourist and taking in every sight with a shiver of excitement as these new sights would soon be familiar to me. 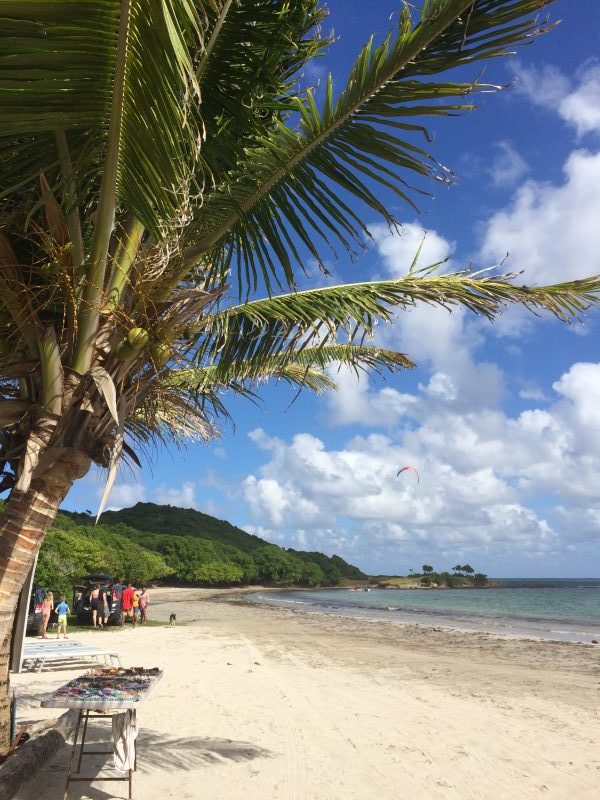 Much to my delight, the streets are filled with coconut vendors selling fresh coconut water.   My delight is two-fold as I enjoy coconut water as a mixer with my rum and my dogs love to chew on coconut shells.  The large green coconuts yield a jelly which they devour with relish. 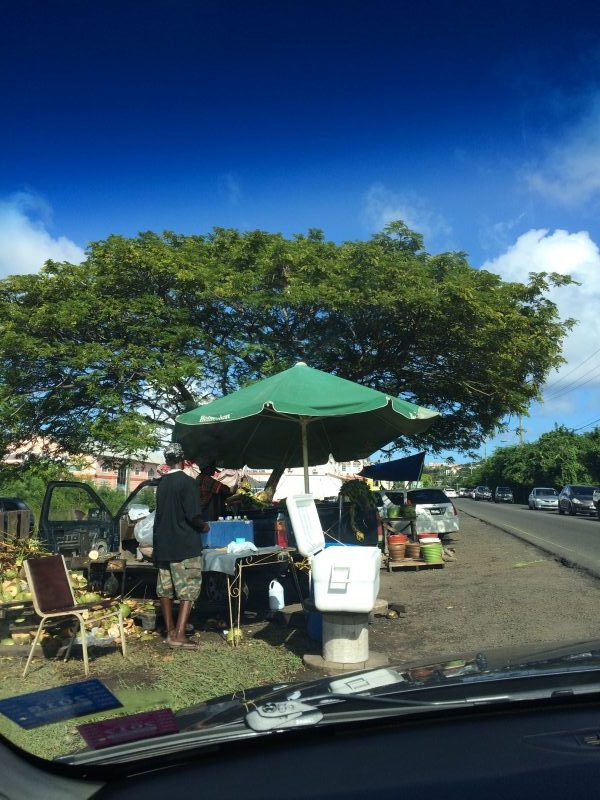 After living in Barbados for a few years, some sights and sounds are familiar to me in St Lucia and make me feel like an island girl has come home.  The sounds of the tiny tree frogs at night are now a soothing background noise.  We have coconut and mango trees in the garden, along with cherry and lime trees.  All the perfect ingredients for a rum cocktail!   The cherries are sour cherries rather than the plump sweet ones I have been used to.  They look the same though so that was a great photo moment as I bit into a juicy cherry, expecting sweetness but got sour.  Rather like picking the wrong sugared jelly sweet and getting a Sour Patch Kid. 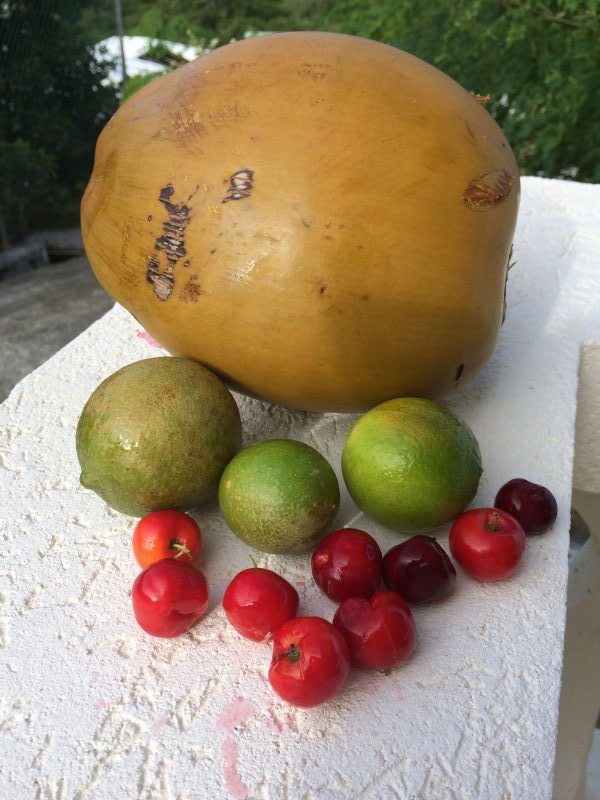 Although the tap water here is safe to drink, most people seem to drink bottled water, so now large bottles of water are on my grocery list.   I’ve noticed that the kettle does not scale as much as Barbados though.

Much to my bemusement we have two sets of electrical sockets in the house.  Both American and British outlets, so we are covered for all appliances it seems!  I curse having to get rid of my lovely hair straighteners from the UK as I could know use them.  Then again, straight hair would not last long with the humidity. 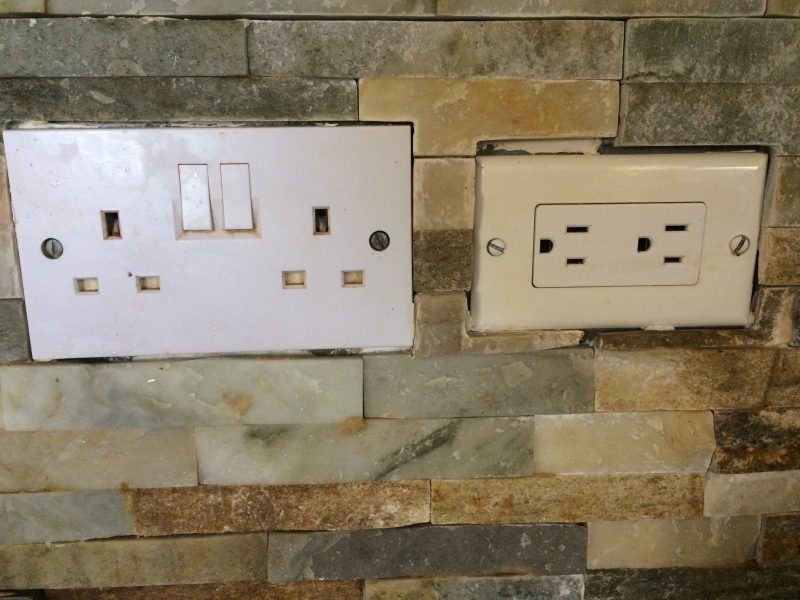 The first of our island “quirk” is that we have no rubbish bins for the house which is a complete first for us.  We now take our bagged rubbish to a fenced area at the bottom of the hill where we live.  I no longer complain about the quirks, but just shrug and say, “island living”.   On the upside, we don’t have smelly bins outside our gate or deal with overflowing bins when the rubbish is not collected.   I don’t envy the people living by the binned area at the bottom of the hill though!

Another island quirk is our oven.   As a food blogger, the kitchen is rather important to me and although our oven is large it runs on a gas canister.  We have no idea of how long it will last so every time I cook it’s like a game of roulette.  Light the oven, spin the wheel and let’s see what happens.  Now we have been in the house a couple of months, we note the date the canister run out and have a rough idea of how long it will last but it’s still a guessing game.   Get a spare one, you suggest.  Nope.  Tried that and the gas station won’t sell us a full one without an empty to swap.   Our first gas canister ran out on Christmas Day.  An hour into cooking the turkey.  Of course, it would run out then, it’s us.  Only the strange and silly happens to us!   The husband went off in search for a gas station open on Christmas day to replace the empty gas canister.    Oh, there were a few open.  However, they did not supply our gas canisters but ones with a different valve.  The gas station we needed were closed on Christmas day.   Although we were tempted to just go to a hotel for the day instead, we knew that they were in full capacity and did not relish a crowded and noisy day.  So, I performed a miracle with our microwave and a toaster oven and we enjoyed a rather liquid Christmas day thanks to rum and wine!

Potholes on the roads are everywhere and some of the roads require a 4 x 4 motor vehicle.  Wear a strong sports bra when driving too on the rough roads!  The road to our house is a combination of “normal road” then a rough track where we navigate through pot holes and strangely placed bumps.   Once you get used to it, you know when to move to the left or right of the road.

Driving here is on the left-hand side of the road which is the same as my home country, the UK.  I’ve driven on both sides happily in various countries but for some strange reason had a mental fear of driving back on the left.  This is the side of the road I learnt on, so this bemused us!  I am normally a petrol head and love driving cars.  I have worked on race tracks and am happy behind the wheel.  I drove in Dubai and after that experience, any other roads are just a joy ride. For the first time I had a fear of driving and it took me a week before I would move from my comfortable passenger seat.  The roads are often steep and the drive up to our house is at good 45 degrees.    So, faced with narrow, pot hole laden, hilly roads was a bit of a challenge for me.   I was nervous on the first few drives, and I felt like crying as something I loved and become something I hated.   Eventually, I made a few solo road trips and am now back to enjoying the roads and firing up the car engine. 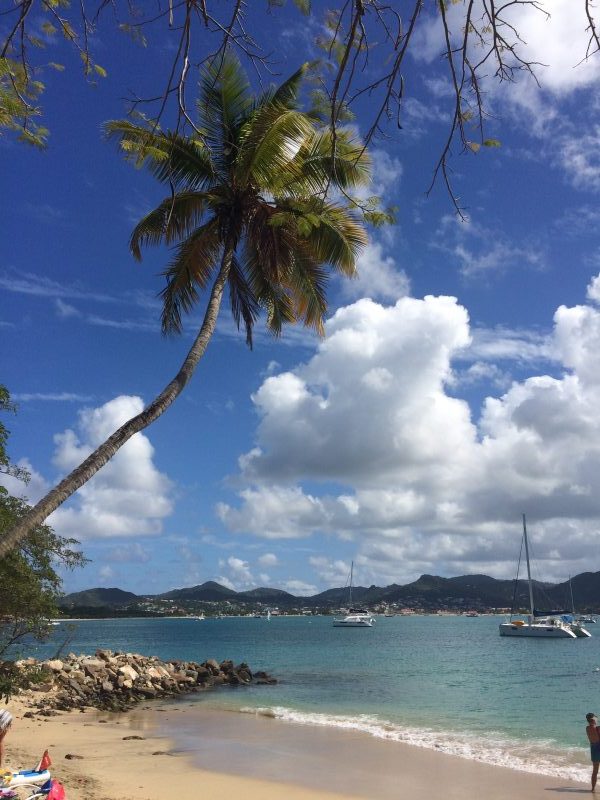 What strikes me most about St Lucia, is not it’s beauty but it’s people.  Everyone is genuinely friendly and helpful.   It’s been the warmest welcome we have encountered to date and it does not feel forced either.    Wherever we go, the warm smile is there.   Even my supermarket shopping is a pleasure as I laugh and joke with the staff.   Finally, we have found an island where we can breath and relax.