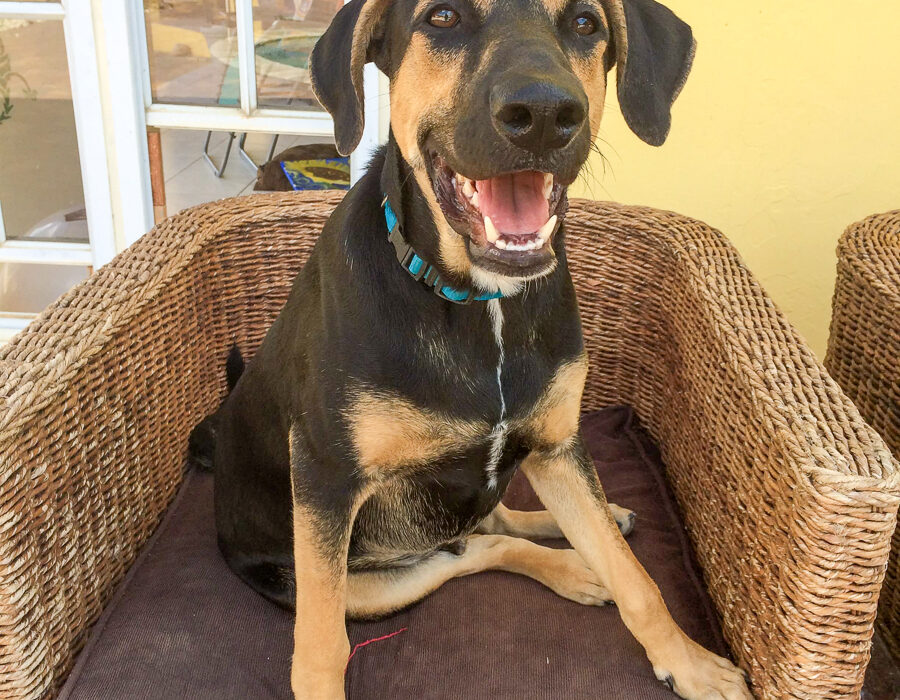 When we lived in Aruba we already had 5 animals.  2 cats from the UK, 2 dogs and another cat from Barbados.  Our animals come with us wherever we live and it’s not cheap to fly them.  We never know how long we are going to live in a country so cannot expand our mini zoo, as much as we would love to.

Animals are a lifetime responsibility and we would not be without them.  When we moved to Aruba we were appalled by how many street dogs there are.  Resisting the urge to put every one of them in the back of our truck and take them home, we decided that fostering was the best choice to help the Aruba dogs.  By giving them a good home, socialising them with our animals and giving them lots of cuddles would help them have a good start and hopefully a viable candidate for their “fur-ever home”.

I awoke on the morning of my first foster as excited as a child on Christmas Day.    Teddy had been introduced to us before to make sure that my two dogs were fine with him, so it was not the first time I was seeing him.  He was rescued off the streets and was about 3 months old.

My other female dogs, Pixie and Sasha, took to him immediately after the customary sniffing.  They were excited to have a new playmate and there was a great deal of chasing around the garden and a lot of tug of war games with rope toys.  At one point, all three were on a rope so this little puppy can really hold his own.

I thought the best way to settle him in was to lure him with food.  It worked on my husband, so should work on a puppy.   I slathered various Kong toys with a peanut flour paste (has no sugar and lower fat content so better for the dogs) and gave him the smallest Kong.  He almost swallowed it whole in one gulp!  That was quickly retrieved and the largest Kong was given to him instead.  Being a rescue he was used to gobbling down any food, so that was a lesson for me.  He eats at a much faster speed than my girls as he started out in life not knowing where his next meal was coming from.

I was struck by how settled he was and comfortable with his surroundings.   The credit goes to Stacy from Dushi Designs who rescued him from near death and nursed him back to health.  He is such a sweet, well behaved little boy who seems so happy.   He had his first introduction to our cats and wagged his tail happily.  He’s yet to learn that they don’t quiet play as dogs do.

Worrying about the first night, I had set up the office for his bedroom.  He took one look and cried so those plans were thwarted.  I wanted him to be as comfortable as possible for his first night in a strange house.  So, I placed one of the dog beds in our bedroom and showed him where it was.  Our girls were already on our bed so he could see where they sleep.  He looked and decided he would prefer to sleep on the lounge rug.   I woke up at 3am, worrying about him in case he needed to go out to the toilet so crept into the lounge.  He looked up, wagged his tail and went back to sleep.   I slept the rest of the early morning on the sofa just to make sure, but there was no need to worry.  He slept soundly and did not stir until my husband woke us up a few hours later.

I kept to my morning routine so that Teddy gets used to the dynamics of the house and it does not upset the balance with my mini zoo either.   After a play in the garden everyone comes inside and has a nap whilst I work on the laptop.  I am still amazed at how well Teddy is fitting into the household and how confident he is.   After the initial excitement of yesterday all the dogs seem tired and spend most of the day napping.   We pop in and out into the garden during the day so that Teddy can relieve himself.  He’s been very good so far and it’s a dry house.

I should emphasise that our dogs are not “yard dogs”.  We treat our animals with love and they live inside the house with us.  It’s a hot country too.  My rule of thumb is to go outside in bare feet and stand in the yard.  If my feet are burning after 5 seconds, the dogs are not allowed out to play as it will burn their paw pads.

Pixie has now started to slow signs of jealousy and is asserting herself as top dog.  I’ve noticed that whenever she starts to growl at Teddy and takes playing a bit too far, Sasha immediately puts herself in between Pixie and Teddy to calm her down.   Sasha is the United Nation of the dog world.   This will hopefully settle after a few days.

After a day of serious napping everyone seems to come alive in the late afternoon when it’s cooler and there’s more playing outside.   Games of Tug O’ War and chasing after balls continue into the evening.

Again, at bed time, we make it clear where we sleep and keep all the doors open. Teddy walks in for a cuddle, then goes back to the lounge.  It’s where he prefers to sleep so we let him be.

Another dry night, no whimpering and a good night’s sleep for me knowing that Teddy is happy where he sleeps. I just cannot get over how lovely Teddy is. He’s such a happy dog and no trouble at all. The husband adores him and is muttering about keeping him, but however tempting that is (so very, very tempting) it would mean that we stop fostering and I don’t want to do that. Already we realise that one of the hardest parts of fostering is going to be saying goodbye.

Teddy asked to go out for a pee this morning which delighted me! I was in the kitchen baking and he came up to me from a nap and nudged me. I immediately let him out and he peed. He got lots of fuss and praise! What a clever little boy!

The playtime between my two dogs and Teddy continues. Sasha is more accepting of him and they are running around the garden chasing each other. It’s great for my dogs to have Teddy here as it helps them socialise with other dogs and also entertains them. As well as tiring them out.

Today I experiences separation anxiety as I needed to go out to do the weekly shop and pay some bills.  There was no lingering in the supermarket for me this week.  Armed with a list and shopping blinkers on, I shopped in record time.   Waiting for 30 minutes to pay my water bill brought me out in a cold sweat as I worried how the dogs were without me.  Well, that was a waste of worry.  They were all sleeping peacefully then I got back and nothing had been destroyed.

Teddy and Sasha are becoming the best of friends and are nap buddies on the sofa.  I put a box by the sofa so that Teddy can reach it.  Our house is a shrine to animals and if they are comfortable, so am I.  He is now sleeping on the sofa at night.

One of our cats, Gingey had a little play with Teddy.  Teddy is fascinated by the cats but still hasn’t worked out that they don’t quite play the same way as dogs.   He has received a few hisses from the other cats when he gets too close, but Gingey happily lets Teddy sniffs him and does not run away.   This is great for Teddy to be used to a cat household too when it comes to adoption.  There will be the inevitable slap of a sharpened claw down the road as all of our cats have down with our own dogs.

The dogs spent all morning sleeping as if they had been out all night. Teddy has settled into a routine very quickly. I suspect that he is going to be our easiest foster. He is such a delight. Teddy seems to be growing every day and at this rate will be larger than Pixie in a couple of weeks. His paws are bigger than Sasha’s and we speculate how big he will grow. The husband is still muttering about not answering the door when he is collection for adoption.

By early afternoon the pack have awoken and crazy playtime commenced from about 2.30pm to 7pm. The dogs ran around the garden and took every toy outside to play with too. Sasha and Teddy are bonding so well that I hope she does not miss him too much when he finds his forever home. Teddy decided that he wanted to sleep with the others on our bed too. The bed was a collection of arms, legs and big paws. He was very good and did not try to sneak onto the pillows as Sasha does.

The daily routine of sleeping, munching and playing continues.  I bake a new batch of pumpkin biscuits with peanut and coconut flour which are devoured with relish.   Teddy has learnt what “water cookies” are and runs with the others when I mention these words.  They are ice cubes which I give the dogs after they have been running around and seem hot.

I chatted with Stacy about Teddy’s next vet appointment for his vaccination (fingers crossed that his red blood cell levels are at the right level for this).   When she mentions that he will then be ready for a flight out to be adopted my stomach and heart churns.  I can’t part with this beautiful boy and he’s already part of our furry family.   The husband and I chat and it is decided.  We want to adopt Teddy.  All those lectures I gave my husband about fostering and having to hand the dog over were a waste of time and air!   I will tell Stacy in person when I meet her at the vets.

Completely disregard the start of this diary!  Replace it with, when a special little puppy comes into your heart, you will not want to let him go.

An early start to a lazy weekend and I take Pixie and Sasha to the beach for a good walk.  Sadly, Teddy must remain behind since all his vaccinations are not completed.  He gets to stay with the husband so is not alone and gets lots of cuddles.

Later that afternoon, we sit outside and watch the dogs play.  We speculate how big Teddy will grow and feel happy that we will get to see this.  He is such a lovely addition to our family and little does he know that he will have an adventure ahead of him, as where ever we will go, he will come with us.  He is going to be so spoilt and have the life that every dog deserves.

All island dogs deserve a good home. Pop along to your local animal shelter and foster or adopt!