Things You Find at the Beach 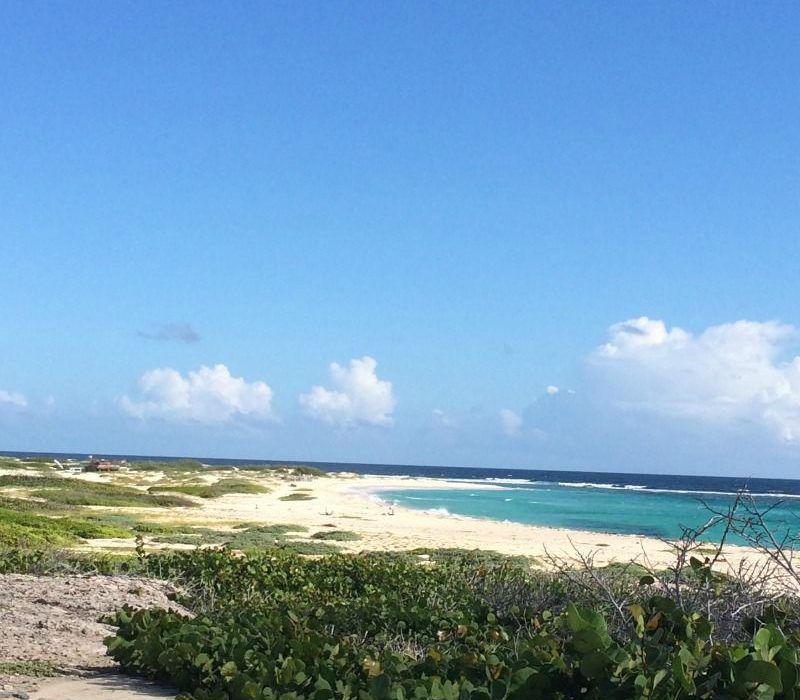 Walking along the beach is one of the best things about island living. The white sand and the range of azure and dark blue colours of the ocean cannot be beat. You expect to find many things on the beach such as picnic rubbish, empty sun lotion bottles and plastic bottles but sometimes the beach walks will throw up something unusual. We have renamed our walks with the dogs “adventures” as every walk is different, even on the same stretch of beach.

A walk on the beach is like a walk through life, you never know what is coming up next.

Here are a few of my more unusual beach finds.

Dead fish
You may expect to come across the odd dead fish washed up, which I need to steer one of my dogs away from as she will roll in it. Dead fish has the same appeal as monkey poo for her. However, one Sunday morning when we lived in Barbados, the beach where we walked the dogs was simply covered in dead fish. We walked about 2 kilometres and the whole coastline was covered in dead fish in their hundreds. It was rather eerie as we were the only people on the beach and just the sound of the crashing waves. Just us, the dogs and hundreds of dead fish. We felt like we in the X Files and I looked around for Mulder and Scully. A breakfast rum never seemed more appealing to balance the bizarreness of the atmosphere. 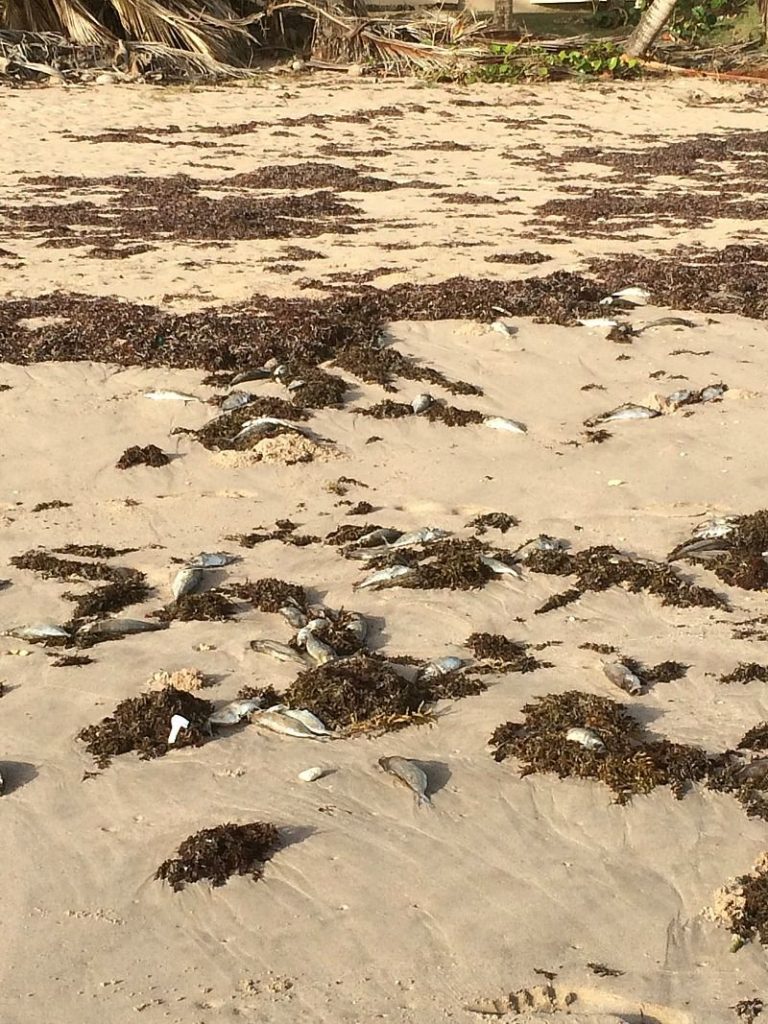 As we were leaving we came across a couple of government officials looking at shoreline. I asked what had caused this and they replied that they were looking into the situation. I looked online for days afterwards and never found any explanation. There are stories of this happening before worldwide and can sometimes be attributed to something called “Red Tide” which is caused by a lack of oxygen and contamination of the water. Other stories are that they are dumped by a fishing vessel that caught too many fish. Some instances of dead fish covered coasts give no explanation. 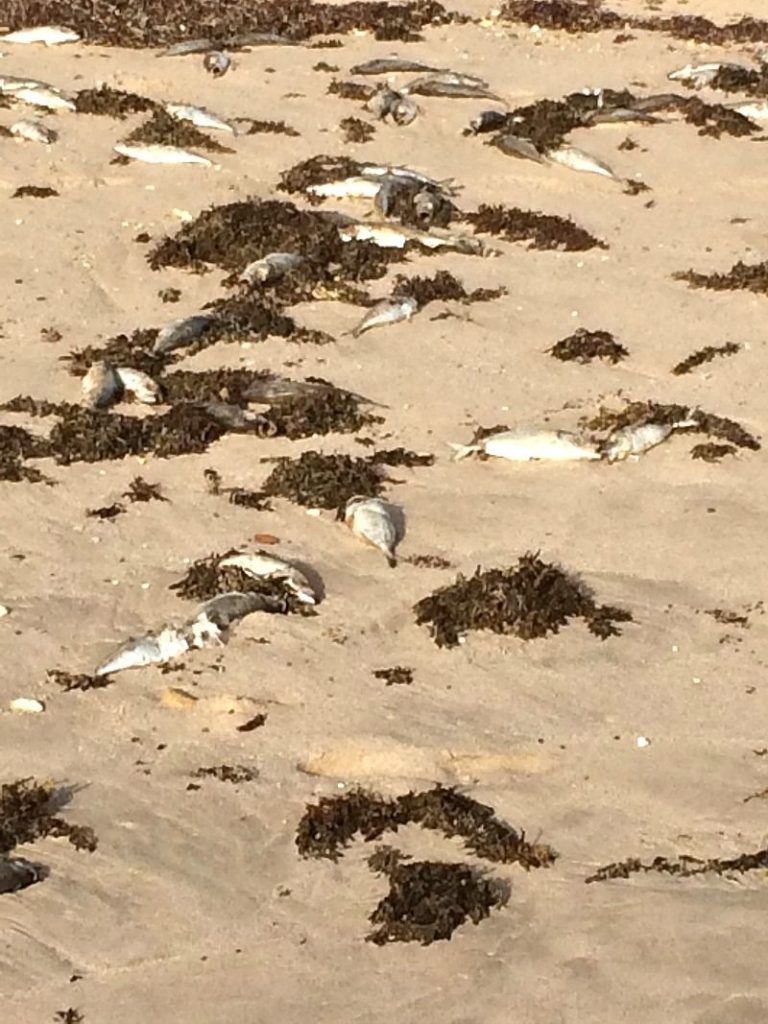 Beach Art
I love coming across creative ways of displaying beach rubbish in art form on the beach. I once laughed at the irony of someone spelling out “keep the beach clean” in plastic rubbish. Wouldn’t it be better for them to have walked to the nearby bin and dispose of this rubbish instead? My favourite art work is the coconut scarecrow. It made me smile as I found this on my morning walk. 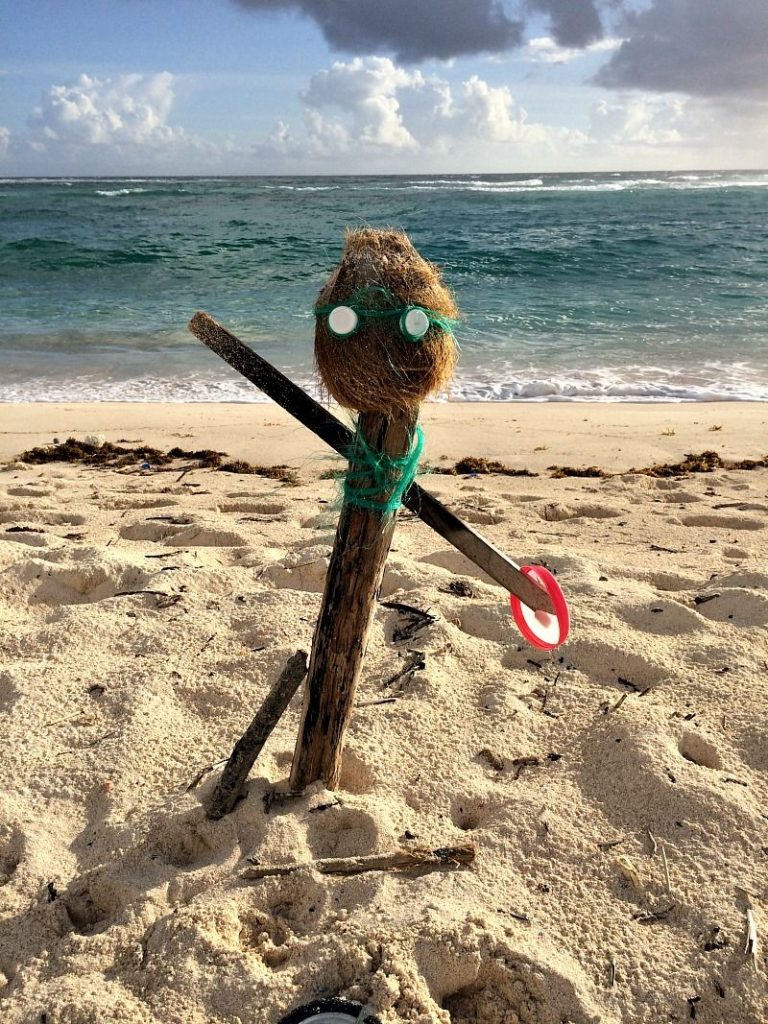 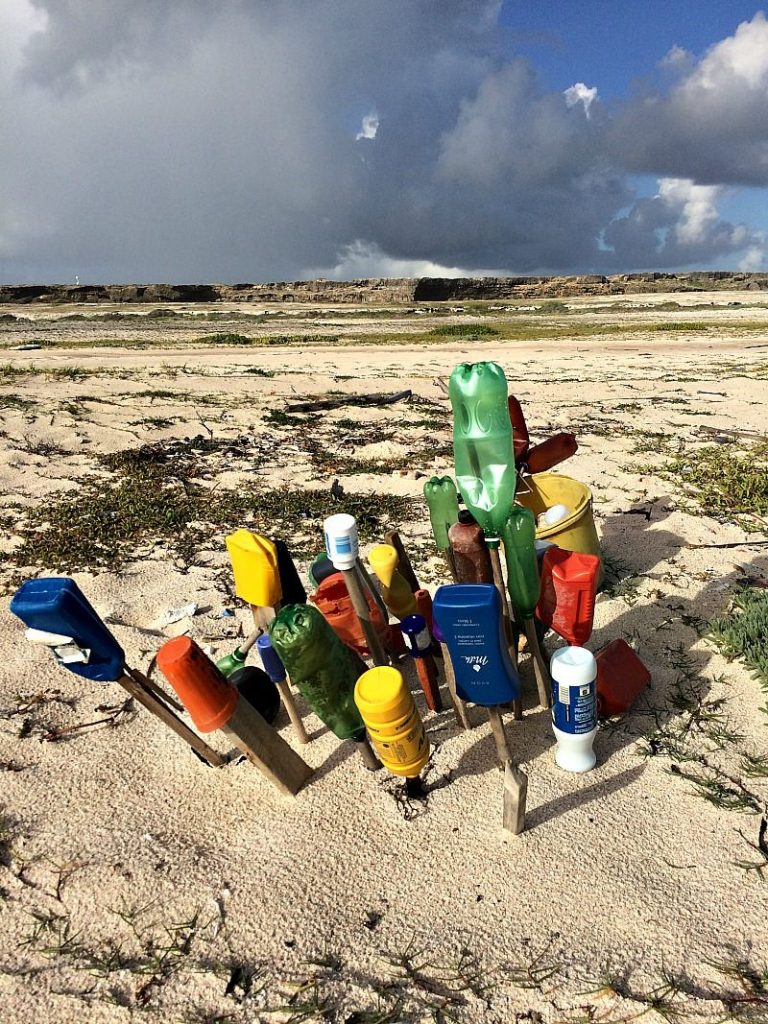 Beach Huts
Away from the main tourist beaches you will find man-made beach huts cunningly crafted out of drift wood and sticks. These are the ones that I love to photograph. Many of them are used by locals having a day at the beach and keeping out of the sun. Existing ones are built on with new driftwood, some new ones appear suddenly. 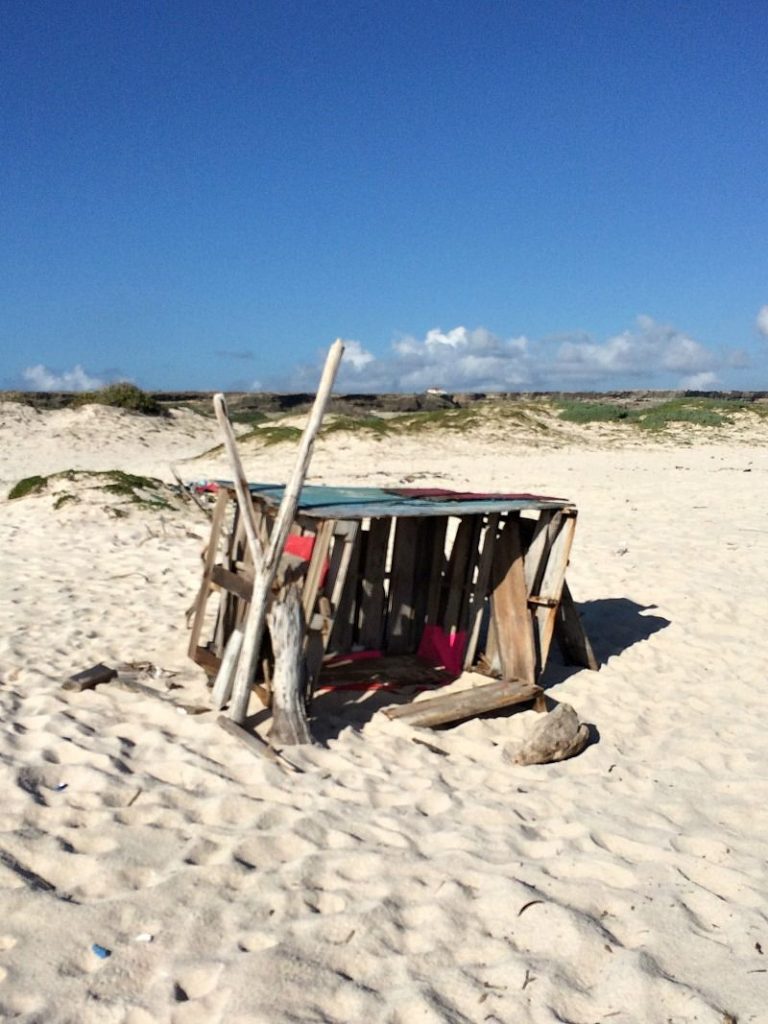 Shoes
Finding the odd discarded shoe, trainer and flip-flop always makes me wonder how this happens? Did the person leave the beach barefoot and just packed up one of the footwear items? I assume that some are washed ashore with the debris that is in our oceans. My best find to date is a pile of single footwear. Did someone gather them all (most likely) but why? Is this a sign or just a beach tidy up (without walking to the rubbish bin on the beach?). Or is this a modern day version of a swingers key party? 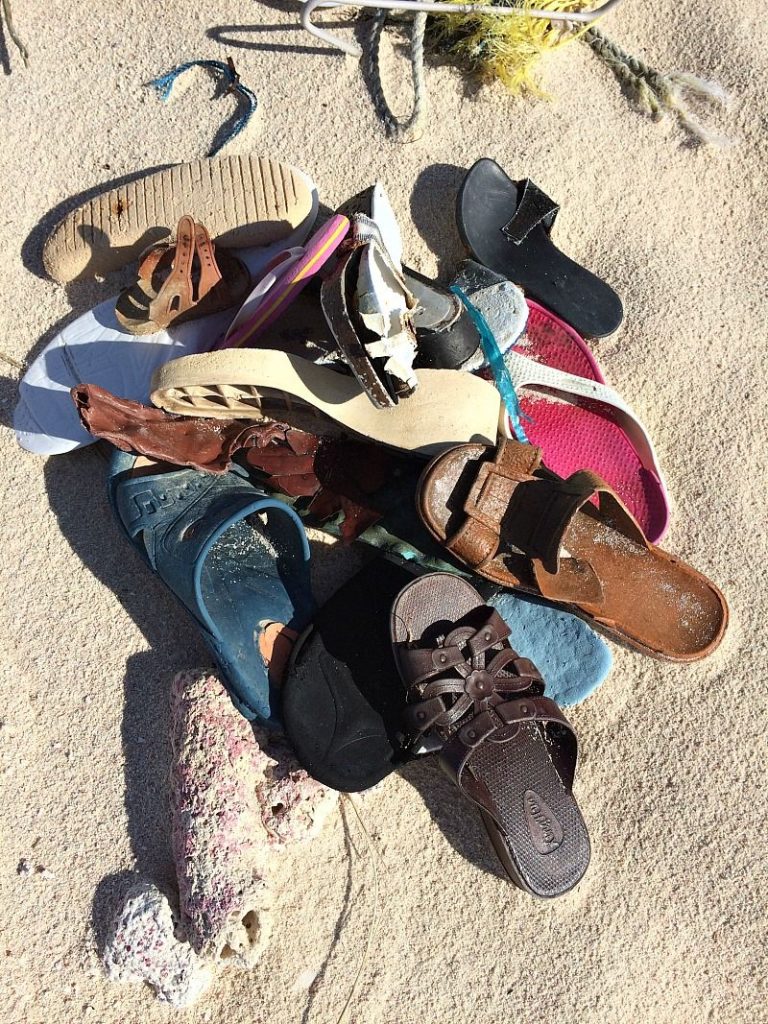 Jellyfish
I grew up on the English coastline so am well acquainted with jellyfish. Prodding them on a beach with a stick was part of our childhood. Screams of “jellyfish” met with a mass exodus out of the sea was part of summer. Now that I live somewhere warmer I come across more brightly coloured jellyfish. Where there are turtles, there will be jellyfish. Happily, for me my encounters with the jellyfish both in Barbados and Aruba have been on the beach rather than in the sea. My most frequent encounter is the bright blue-purple Portuguese Man O’War. 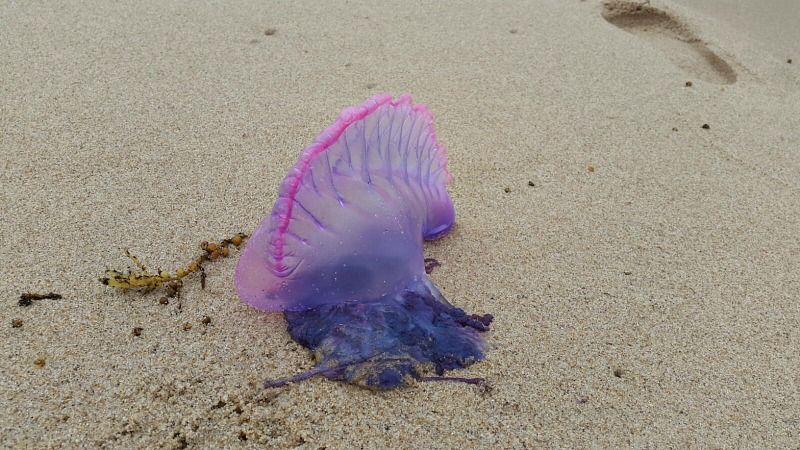 They may look pretty but pack one hell of a sting. The first time I came across one I thought it was a deflated balloon. Once I realised what it was, there was a loud command to the dogs to get away and on we moved quickly! 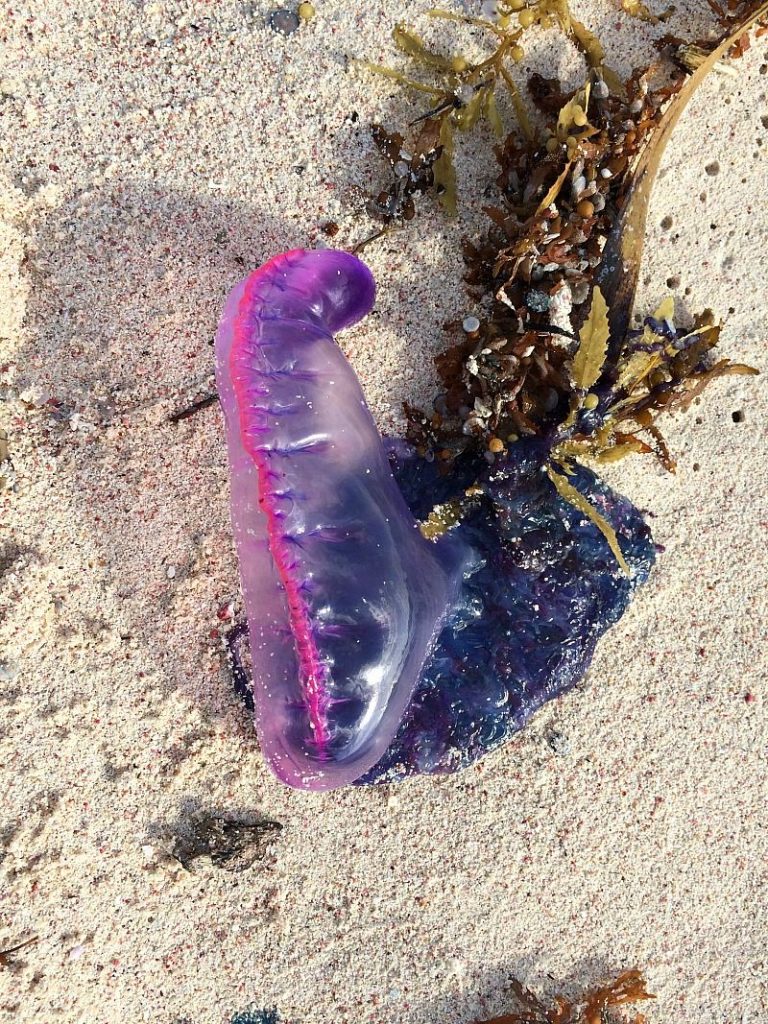 Rock Piles
There is a tourist tradition made by tourists of piling up rocks on top of each other mainly on the north-eastern side of the coast. Legend has it that they make a wish for every stone laid. I’ve found this also recently on the south coast. 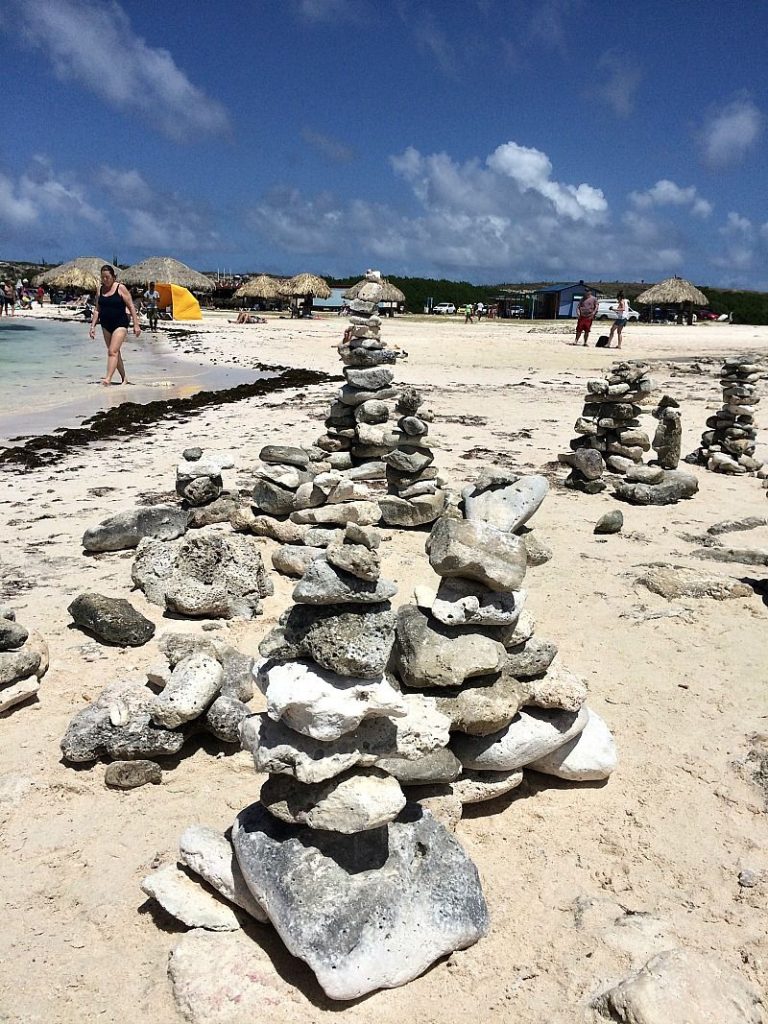 Despite what the tourists believe, there is nothing spiritual about them and there is no island ancient tradition attached to them either. Why this started I am still unsure but once a year these are all knocked down as they are regarded by locals to be a form of beach graffiti and not conducive to the shoreline. 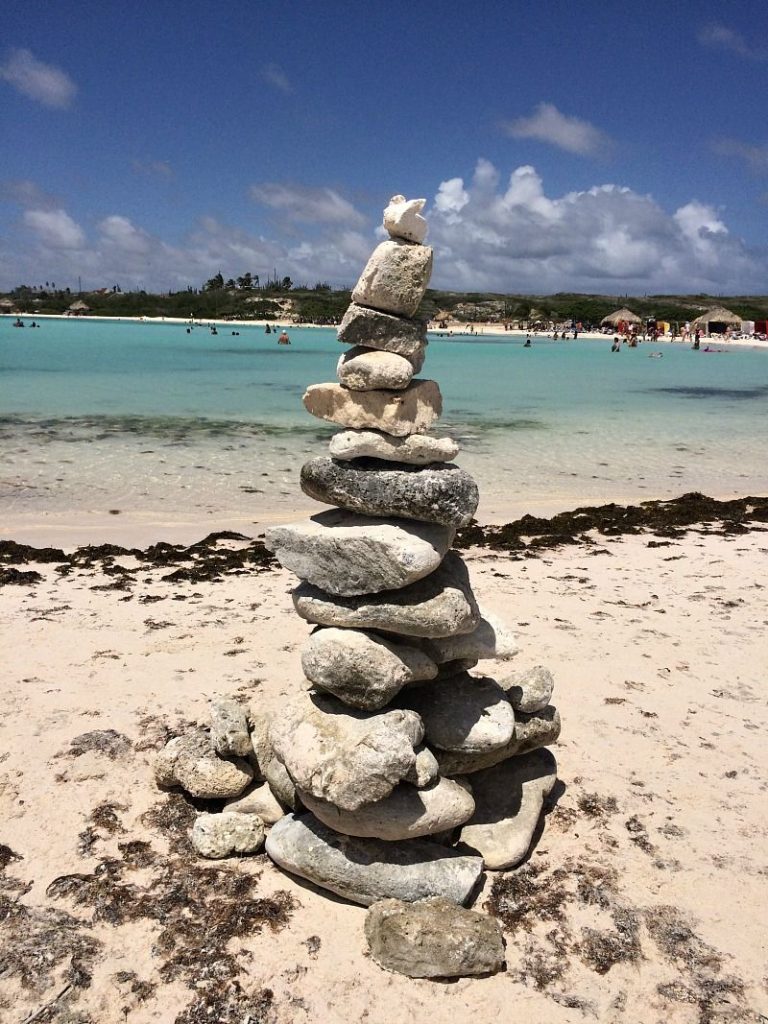 Beach Manoeuvres
There is no photo of this as I would have been arrested for doing so, and if I am to be arrested I would rather it be due to too much rum and not something I saw on the beach. One afternoon I was walking the dogs on a solitary beach in Barbados. I noticed a dark form in the distance slowly moving towards us. Normally any group beach walkers wear bright clothing but since my retinas were not being pierced by Day-Glo pink it was not them. There was an eeriness to the movement of this mass of people moving towards us.  In a solid form and with methodical movement.  I moved the dogs quickly to the car with my overactive imagination in full progress. As it was, there was no need to panic as it was the island’s army on a run in full combat gear and back packs. That explained the lack of colour and if they were meant to be terrifying anyone that they were approaching it certainly worked! Army vehicles followed them along the road, with a medical ambulance too. Running in that heat with a large back pack could not have fun.  Especially in boots. Not a single reef shoe in sight! My phone camera finger was itching but any photos of them is forbidden. Still, it was a rare sight of 50 plus men in full uniform running on the beach.

Spaceship
Although this was not witnessed by myself on my beach adventures, it occurred whilst we were living in Barbados and is unusual so is worth a mention. Back in 2016, debris from a Russian rocket launched out of French Guiana was washed up on the east coast of Barbados. Beats finding a few unusual looking shells!