When I first arrived in Barbados I was unable to get a good night’s sleep for at least the first week, despite being a regular ear plug wearing as the husband is a serial snorer.  The cause was not the rum punch snores from the other side of the bed but the sounds of a tiny tree frog that about the size of my thumb nail.

One strange fact about these tiny frogs is that they hatch from the eggs as live young and skip the tadpole stage.  These tiny frogs are known as whistling frogs and together made a loud chorus that could equal the dawn chorus during a British early summer morning.   They sometimes sound like a squeaky wheelbarrow!

When it rains it seems to bring them all to life, like little Gremlins coming in contact with water after midnight, and the sound of them all together can initially be very loud and disturbing to a new visitor to the island.   Now I am accustomed to their nightly song and during the dry season find it strange at night not to hear their song.

They seem to love to gather on our patio doors at night, catching any flies and spiders much to the delight and frustration of the cats, who can only pat at them against the window.  Although their song usually occurs at night, we seem to have one loner in our carport, at the bottom of our house who solitary chirps are rather sad because no one replies back. 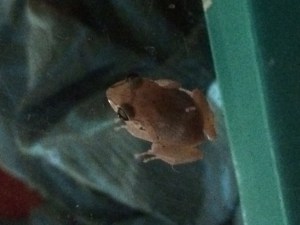 The first place we lived in seemed to be in the middle of a frog community as they were always hopping inside.  Especially in the shower.  Nothing like a little frog jumping up on your leg in the morning to wake you up!  The cats were in their element and spent evenings by the edge of the doorway which seemed to be the frogs favourite entrance.  In the morning there would be the inevitable crime scene with a poor frog laid out in the murder position.  The cat’s drawing a chalk outline around the body before it was moved.